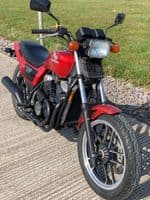 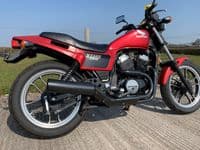 VT500 is a common name for the family of Honda motorbikes sharing the VT500 in line V-twin engine. Launched at the Cologne  motorcycle show in September 1982, it was produced with various designations for different countries, such as Ascot, Shadow and Euro. The Ascot was only available in North America and only for 1983 & 1984 overlapping the similarly named but entirely different 1982-1983 Honda FT500 Ascot.

This running VT500 Ascot showing only 14,115 miles has arrived in Somerset, Its appearance is sporty with a square tank (2.5 gallon capacity) tapering to the long sleek seat with a gentle bump for the passenger tapering to the similarly shaped rear cowl and comes in  metallic red ,a very similar colour to the 83's "Candy Bourgogne Red" but a slightly darker red base coat.

This bike is in pretty good shape although it does have the usual patina you would expect from a 38 year old bike , it comes with a title and Nova documentation ready to register here in the UK and we can help you with the process which is a lot easier than you may imagine.