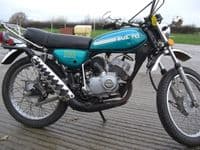 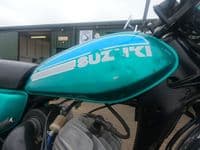 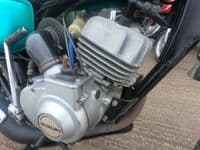 This Suzuki TC100 from 1975 was living in the US before it arrived and has now been  registered here in the UK. These are great fun bikes and this is one of the smallest and easiest to handle in the TC and TS range .This one comes to you in good condition and runs well, either ride or restore the choice is yours, it also  comes with lots of spare parts including another tank.

Suzuki TS and TC Series
The Suzuki TS series was a range of bikes usually referred to as trail bikes, dual-sport bikes or Enduros. The TS and TC were very similar except for the low ration gearbox on the TC version. This was accepted to be the best way Suzuki could attempt to overcome the lack of low-down torque of a two-stroke motor against its four stroke rivals.
The TS and TC series were characterised by a single cylinder two-stroke motor and off-road styling with high ground clearance, knobbly tyres and exhausts swept up away from the ground. Having their heyday in the 70’s they did feature more chrome than the offerings which came later from other manufacturers.